Our profound love of and high standards for eating Italian, our promise to provide unrivaled experiences across all our restaurants, our passion for genuinely connecting with the communities in which we serve, and our commitment to making everything fresh from scratch every day, just like grandmom did—all lie at the heart and soul of the LaScala Restaurant Group’s continued growth and success.

And to think, it all started back in 1969 in Media, PA, when a secret homemade dough recipe and a specially blended sauce gave birth to a fast favorite pastime for Philadelphians—eating a slice of Apollo pizza.

THIRTY-SOME YEARS LATER at the turn of the millennium, Rob LaScala, an entrepreneur since the age of 8, purchased the famed Apollo Pizza location with its secret recipe in tow. Before long, he had four “Best of Philly” titles and six Apollo pizzerias, and in 2005 a seventh Apollo location opened its doors as our first full-service restaurant. Located in Philadelphia on the corner of 7th & Chestnut Street, it was an instant success because of its large selection of homemade Italian American favorites, cozy full-service bar, and dedicated staff.

IT WAS SO WELL-RECEIVED we quite appropriately changed this location’s name to an Italian one—ours! LASCALA’S RESTAURANT & BAR was born, and the rest is history.

IN 2011 WE EXPANDED the brand with the opening of LASCALA’S PRONTO on Spring Garden Street, specializing in takeout and delivery service to offer our customers Italian-American Home-Style FAST in a family-friendly atmosphere.

IN 2016 WE BROADENED OUR REACH with the launch of LASCALA’S FIRE at The Promenade at Sagemore in Marlton, NJ. With its modern décor and open atmosphere, LASCALA’S FIRE brought a new flair to the group by specializing in wood-fired Italian cooking and adding new offerings to the list of LASCALA’S favorites.

LOCATED IN THE HEART OF SOUTH PHILADELPHIA on Passyunk Avenue, LASCALA’S BIRRA became the fourth brand to join the family in 2017. Formerly Birra, this location was rebranded to add a new dimension—creative pizza, artisan Italian, and world beers.

TWO YEARS LATER our second LASCALA’S PRONTO opened its doors in Medford, NJ, and quickly became a mainstay in the community with its friendly management and steadfast promise to always, no matter what, deliver pronto!

THE YEAR 2020 ALSO marked a very special, yet bittersweet, milestone for the LaScala Restaurant Group when we transformed our flagship restaurant, LASCALA’S, at 7th & Chestnut to become Philadelphia’s first LASCALA’S FIRE! And while the world as we knew it was changing tremendously, the LaScala Restaurant Group kept its doors opened and placed an important focus on saluting the amazing, tireless workers on the frontlines any time we could with complimentary pizza and Italian fare. To us, it’s always family over everything, and our community and our employees are an important part of our family. We applaud all those who have worked and continue to work on the frontlines and thank our managers and employees for hanging in there with us during the oddest year+ of all our lives.

SO FAR THIS YEAR we are pleased to announce that LASCALA’S PRONTO in Mt. Laurel, NJ, is now back to the original LaScala Restaurant Group ownership, which makes this location at 4040 Dearborn Circle our 3rd PRONTO! Also, our beloved FIRE customers and friends in Philadelphia will soon have a second haunt in the city of brotherly love, as our newest LASCALA’S FIRE will open its doors to a new, cozy home at 3200 Chestnut Street in University City this October!

AND, ALONG THE WAY, IT HAS BEEN AND WILL CONTINUE TO BE OUR PRIVILEGE to cook for our customers whenever they want to celebrate…anything! From weddings to corporate events, birthday parties to bridal or baby showers, and everything in between, whether it be at our home or yours, our Italian American LaScala-style cuisine is sure to please, time and time again. Let’s Eat!

Receive the latest news, happenings, and offers on seasonal celebrations…and perhaps some perks along the way!

Receive the latest news, happenings, and offers
on seasonal celebrations . . . and perhaps
some perks along the way!

The LaScala Restaurant Group is following state and city guidance on capacity restrictions, social distancing, and the use of masks for all staff and for customers (unless seated and eating).

To purchase classic gift cards at any amount you choose, kindly provide your name & number (email is optional) and our General Manager will contact you shortly to take your order... 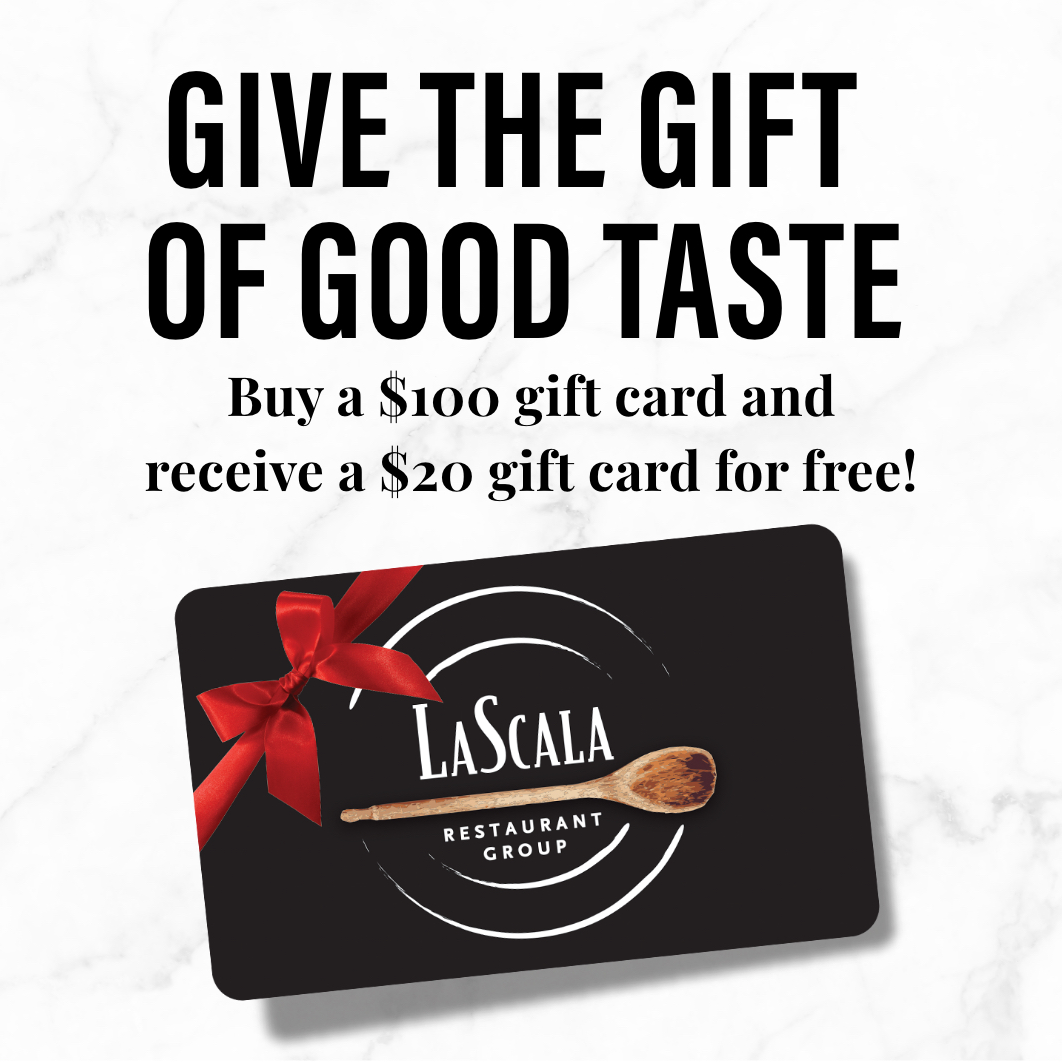